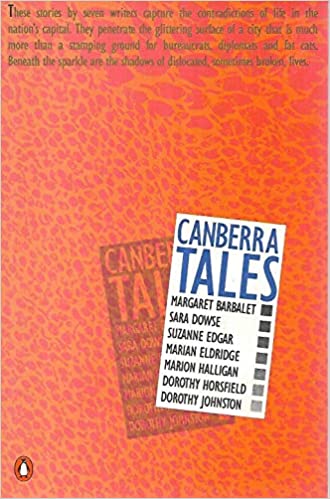 In 1978  I was serving my writer’s apprenticeship, publishing a few stories, poems, articles and reviews, but hadn’t yet plunged into a novel.  A friend gave my phone number to Dorothy Johnston, a newcomer to Canberra who wanted to meet other aspiring novelists.  Dorothy also contacted Margaret Barbalet and in 1980, though a notice in the Canberra Times, we formed a women’s writers’ group.  We had several members but numbers dropped off and the group was reconstituted with Brenda Walker and Elizabeth Toombs, both as serious about novel-writing as Margaret, Dorothy and I were.  We critiqued each other’s drafts, and discussed the work of Australian novelists we admired.  (I remember our worshipping Christina Stead and Shirley Hazzard at the time.)

When Brenda left for Perth in 1984, and Elizabeth for Wales, the character of the group changed.  By then Margaret, Dorothy and I had books out and were known enough, around Canberra at least, to interest other published writers, and were joined by Marion Halligan, Marion Eldridge, Suzanne Edgar and Dorothy Horsfield, all of whom had published short stories and were writing novels themselves.  We began reading together in public, adopting the name Seven Writers for this, though people often called us The Canberra Seven.  In 1988 we published Canberra Tales, for which we’d received a Bicentennial grant.  Penguin republished the anthology in 1995 under a new title, The Division of Love.

The seven of us kept meeting until around the end of the 1990s, by which time Marian Eldridge had died and I went to live in Canada.  For a writers’ group we were unusual for the length of its duration, the number of books we produced, and the way we went about our meetings.  We set monthly workshops, when one of us would have her work critiqued, an arrangement that suited the lengthy manuscripts we were writing and the depth of consideration they required.  The criticism could be savage but I still give thanks for the method – a crucible, formed in friendship, that not only taught me a lot about writing but prepared me for editing, mentoring and teaching as well.

Seven Writers appeared on the ABC Sunday arts program and has been written about in various newspapers and journals.  A chapter about us appears in Republics of Letters: Literary Communities in Australia edited by Peter Kirkpatrick and Robert Dixon, published by Sydney University Press in 2012.

My contribution is the long short story, or novella, ‘My Cousin Poalo’.