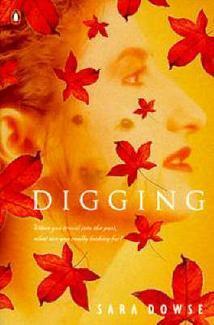 Digging, published in 1996, was written at a difficult moment.  In a sense it wasn’t meant to be written at all.  I had begun work on what was supposed to be a biography of my grandfather’s sister, a woman whose existence was unknown to me until 1974, when my mother happened to mention her.  Sapphires is based on my maternal grandmother’s family, but I knew next to nothing about my grandfather’s.  My curiosity was piqued.  My mother’s casual mention of his sister sent me on adventure over three continents to discover her story.

The travelling proved the last straw for my 19-year relationship.  Shattered by the break-up, I put the biography project aside and embarked on what I thought would be a collection of essays on the animals in my life, beginning with the beautiful English setter who’d been with us until she died.  The story grew, transmogrified into fiction, and Digging was born.

I wasn’t the first writer compelled to put a dog’s life on paper.  The one I knew best was Virginia Woolf’s Flush – as it happens a biography, but an imagined one of the poet Elizabeth Barrett Browning’s cocker spaniel.  Yet my inspiration was the 1434 portrait of the Arnolfini couple, in which the artist Van Eyck has a small dog in the painting’s centre as a symbol of their domestic contentment.  I was also influenced by the Jungian idea that dogs in dreams can symbolise intuitive perception.

My hope was to create something of a modern fable, and Digging is imbued with folk tales, archaeology and ruminations on the world as a dog might perceive it.  The shortest of my novels, it opens with a woman sighting the ghost of her dog Carly who’d died 12 years before.  (Carly is the only character named, others are given initials, the narrator none.)   Thus begins the woman’s delving into the past she’d shared with Carly, the baby who’d been nurtured by them and their uneasy connection with the baby’s archaeologist father.

“Dowse is a master of the long, fluid sentence, perfectly crafted and assured. Her reconstruction of legends and folktales is handled with considerable aplomb. Read her prose and enjoy.” The Australian

” Much of the text is, in fact, a sensitive meditation on the experience of motherhood … a text that is distinctly feminist … Inspired by the vision of Carly, the central character ultimately allows instinct and intuition to guide her in the excavation of her relationship with X and the circumstances around the birth of their son.  As she says, ‘They say that dogs are magicians; that they represent the inner life, that following them … will lead you to gold.’ ” Nadine Davidoff in the Australian Jewish News