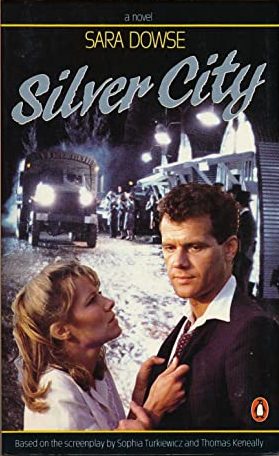 Soon after West Block appeared, Penguin approached me with a proposition.  I’d been working on a second novel about an Australian filmmaker hoping to make a name for himself in Hollywood.  To boost my meagre bank account and acquaint me with the local film industry, they proposed that I write a novelisation of an Australian movie, Silver City – a first for Penguin – and I was to work from the screenplay.

My contract stipulated that I’d be able to diverge from it whenever I thought it necessary to make the story work as a novel.  I visited the set as Silver City was being filmed and was given eight months to write the novel, to coincide with the movie’s release.  Needless to say, it was a challenge.

“Sara Dowse didn’t just adapt a screenplay but wrote a great novel besides. ‘Silver City’ (Penguin, 1984), ‘a novel based on the (1983) screenplay by Sophia Turkiewicz (the film’s director) and Thomas Keneally’, is a rich and moving story about a group of Polish refugees fleeing World War II Europe for a new life in Australia, beginning at the transit camp known as Silver City. One senses that Dowse was truly inspired by the story, especially with the characters of Nina and Anna. The text is filled with character reminiscences, thoughts, and descriptions that simply couldn’t be captured as well (if at all) on film. A great read, a work of art.” (Jaye Valentine, United States, January 2, 2005, )