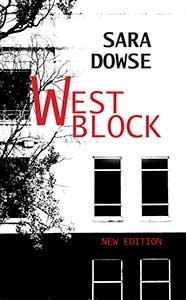 In December 1977, I resigned from the public service, resolved to get serious about writing.  For three tumultuous years I’d headed the women’s unit in the prime minister’s department’s, working on women’s policy up to and after the Whitlam government’s Dismissal, a crisis in Australia’s history and a moment of profound disappointment for many public servants. So when I sat down to write my first novel, I named it West Block for the building that housed the department and for the people I’d worked with there.  I needed to express my respect for them, with a few noteworthy exceptions.

First published in 1983, West Block was reprinted five times, and in 2020 came out in a new edition.  The action takes place in 1977, in the aftermath of the Dismissal.  Though it’s never explicitly mentioned, the book tells of its impact on five different members of the prime minister’s department.  Their stories are told by Cassie Armstrong, the feminist who heads of the Women’s Equality Branch, or WEB.  Each of the five bureaucrats, including Cassie, has their own story and appears, Rashomon-like, in the others.

Come 1980, bureaucrats were getting a bad name for themselves, as successive governments politicised the public service and hollowed out its capacity   It’s only now with the challenges of climate change – the bushfires, floods and COVID – that Australians are realising why we need a public service with a strong policy role and the capacity to deliver.  I think it could be why a publisher suggested bringing it out in a new edition.

“Sara Dowse makes great use of irony in attacking the bureaucratic beast . . . she manages to reduce the monster to a manageable scale and dissect it with a fine sense of proportion, humour and humanity. ” The West Australian

“What Dowse handles superbly are the negotiations, the committee and the decision-making – in fact, those materials that appear most resistant to art… Her public servants come to life when they do their jobs; it is as bureaucrats that they spread their grey wings to display sharper colours, somethimes pink with idealism, elsewhere crimson with blood.”
Sydney Morning Herald

“For Dowse the process is the vital and absorbing thing… the business of government, the micro-mechanics of power live in her pages.” Adelaide Advertiser

“While taking itself seriously as a novel, Sara Dowse’s West Block will provide much that is instructive to those interested in learning how our Prime Minister’s Department really operates. In fact, it is most successful in examining the bureaucratic doings of its characters. They exhibit a style and substance which matches with uncanny faithfulness those of the real human cogs in the Canberra machine.” Australian Financial  Review

“To find a novel which considers contemporary issues intelligently is itself a delight. Dowse attempts more than this – she relates the issues to individula lives and personalities. Her approach to novel writing demands sympathy for people and seriousness about policies.” Canberra Times

“With sensitivity and humour, she has added features and soul to the faceless image of the public servant.” Australian

“The novel is as timely now as it was in the 1980s, combining, as it does, unforgettable insights into the workings of federal politics with an imaginative study of flawed human lives.”
Canberra Times

“Ultimately, West Block pays tribute to the public servants who understand that their role is to be “servants of a nation” not of their political masters. This is the role of the public service, no matter how much its political masters would like to make it otherwise. Unfortunately, this fundamental principle has been increasingly tarnished over recent decades, which makes
re-publication of this novel, now, all the more relevant and, dare I say, necessary“
Whisperimg Gums